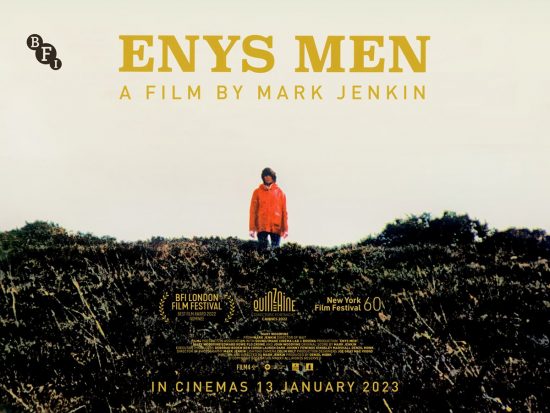 Enys Menwritten, directed and photographed by Marc Jenkinsis the second feature from the Cornish filmmaker’s visionary mind, following 2019’s BAFTA-winning craft hit Bait. It opens in the UK on January 13, 2023 at BFI Southbank and in UK cinemas.

This mind-blowing Cornish folk horror set in 1973 is set on an uninhabited island off the coast of Cornwall. A wildlife volunteer’s daily sightings of a rare flower take a dark turn toward the weird and metaphysical, forcing her and viewers to wonder what’s real and what’s a nightmare. Is the landscape not only alive but sensitive?

Shot by Jenkin on grainy 16mm color film and with its signature post-sync sound, the form is both innovative and authentic to the era. Shot on location around the disused tin mines of West Penwith, it’s also an ode to Cornwall’s rich folklore and natural beauty.

Mary Woodvine (Poldark, Judge John Deed, Doc Martin), who played Sandra on BAIT, is The Volunteer. She reunites with the BAIT co-star Edward Rowe (The Witcher, House of the Dragon) which is The Boatman. Based in West Cornwall and previously working in theatre, film and television for over 30 years, Mary Woodvine is in almost every scene in the film and gives a stunning and naturalistic performance, working with minimal dialogue and with the camera. who follows her very closely. -at the top.

In the lead up to the release of ENYS MEN, Mark Jenkin will embark on a Q&A tour across the UK from January 2, 2023, with a number of dates in Cornwall. Mary Woodvine will be present on certain dates.

One season, The Cinematic DNA of ENYS MEN, programmed by Mark Jenkin, will run at BFI Southbank and on BFI Player throughout January 2023. Comprising feature films, documentaries, TV programs and shorts, the season will give a context to ENYS MEN and the inspirations behind it, also giving audiences the opportunity to enjoy rich and rarely seen content.